In case you’re not familiar with it, Hoof Armor is an adhesive coating originally designed to protect against wear and chipping. For many years, that was all there was to it. Hoof Armor by itself (no horseshoes or boots) has been used to prevent excessive wear somewhere, every week, for endurance rides of 50, 75 or 100-miles as well as all performance disciplines and everyday trail riders. Hoof Armor works well to protect against wear and abrasion, but I always thought there was more functioning on a molecular level I couldn’t see.

The present formula, the sixth, is as safe as I can make it for horses and the people who are applying it. It is an epoxy base which is similar to the plastic milk jugs you see in the stores and also similar to the linings of metal fruit and vegetable cans which you don’t see. Obviously, this formula was approved by the FDA for use in contact with food. Another ingredient is Kevlar™ which is an inert material that you could probably eat with no serious effects, although it is not recommended. Another ingredientis a natural one made from non-GMO plants and used in food and skin care. All as safe as possible.

Research has shown an ingredient in Hoof Armor to be an effective antimicrobial: Inactivation of bacteria can be as brief as 30 seconds and, it could safely and completely inhibit the growth of bacteria such as Salmonella, E. coli and Listeria.

The success with White Line Disease led to trials of treating Thrush and as a preventative for horses that were historically prone to Thrush. These trials are on-going.

Now, further research has proven this ingredient to have additional benefits.

This ingredient and been shown to improve elasticity, increase collagen density, and actually increase dermal thickness. Another study reported 4-weeks of treatment resulted in up to 19% increase in epidermal thickness.

(Sorry, I can’t provide references without revealing the proprietary ingredient.)

This research leads me to propose that Hoof Armor not only be used to prevent excessive wear on the bottom of the hooves; not only as a treatment and preventative against infections over all the hoof surfaces; but as a hoof conditioning agent that is safer than anything on the market. I would suggest the application of Hoof Armor with every trim as an integral part of a continual and progressive hoof care development plan. Hoof Armor can be used with horseshoes to protect the sole like a pad, except it will not grow out with the hoof wall or allow dirt to enter from the back. Hoof Armor can also be used with hoof boots as additional protection in case the boots come off or to prevent the hooves from excessive moisture and abrasive particles inside the boot. 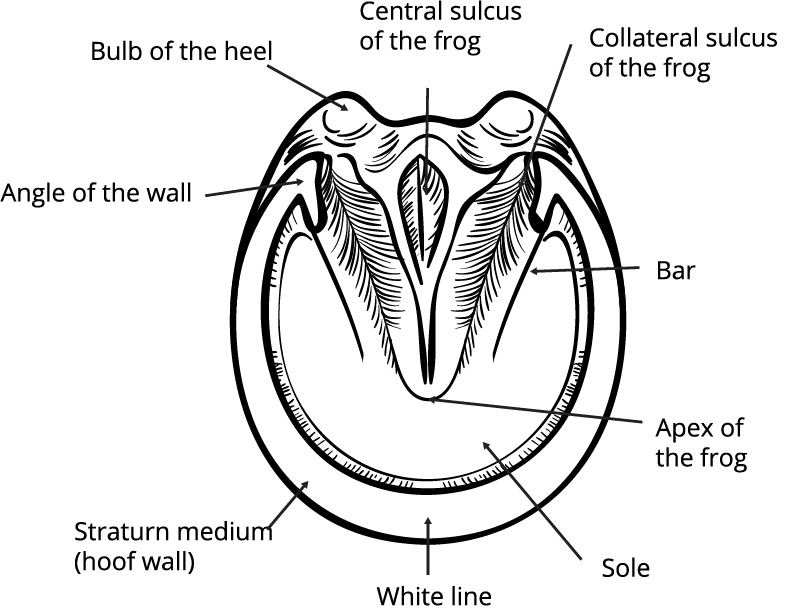